It has now been five weeks since the Russian invasion of Ukraine. Stephen and Patti Hertzog have just returned home to Bratislava after spending some time at the Ukrainian/Slovak border. Click on the link below for a look at the scene as refugees enter their country:

Here is a quick update on the situation in Ukraine:   1  The military situation on the ground has not changed much since the last update. Fortunately Russian troops have barely advanced as the Ukrainian army continues to offer stiff resistance.

2. Unfortunately the humanitarian situation on the ground is still terrible. Ukrainian cities are being shelled relentlessly as the enemy tries to bomb them into submission. On the positive side, some of the “humanitarian corridors” agreed to by Russia & Ukraine are working now and people are getting out, though the Russians are not letting any humanitarian aid into besieged major cities like Kharkiv & Mariupul. These cities are surrounded and have no power, heat, or water… and food is scarce.

3   Almost three million people have now gone to other countries as refugees. Another two million have fled the heaviest fighting in the south & east and are now Internally Displaced Persons (IDP’s) in the relatively safer west part of Ukraine, though recently targets in the West were bombed as well. 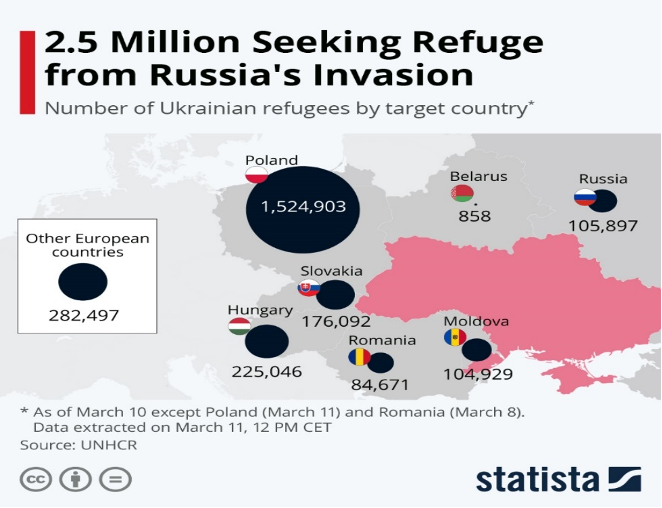 4   In response, ERDO (Emergency Relief and Development Overseas), the humanitarian branch of the PAOC… has sent $100,000 to help IDP’s in Ukraine. Local churches, acquainted with the Hertzog's, in Canada have sent twice that amount. The aid is getting through and is literally making the difference between life & death… praise God. Please take a look at this 53 second video of food sent by our church in Kosice, Slovakia (an ERDO partner) arriving by bus at a church in Ukraine.   5   ERDO is also in the process of distributing about another $100,000 to Pentecostal churches in the countries bordering Ukraine… Poland, Slovakia, Moldova… to help them feed & house these dear people. In addition, a few local churches connected with the Hertzog's have sent over $100,000 for refugee assistance to churches in Ukraine & East Europe. (PS: All donations are most welcome and can be made at here. The funds will be a big blessing!)    6   Indeed, one of the few silver linings in the terribly dark cloud of war has been how the Pentecostal churches inside & outside Ukraine are shining the light of Jesus and stepping up with a huge effort to help those fleeing the violence. Some churches in Ukraine converted their basements into bomb shelters to protect their communities. Others turned their facilities into refugee centres with volunteers cooking meals 24/7 for the incessant flood of people seeking refuge. Lviv Theological Seminary (LTS), their primary educational partner in Ukraine, has opened its dorm to IDP’s and is now housing and feeding 100+ daily. Food is available (but getting more expensive) but they are running out of desperately needed medical supplies, which we are trying to ship them. 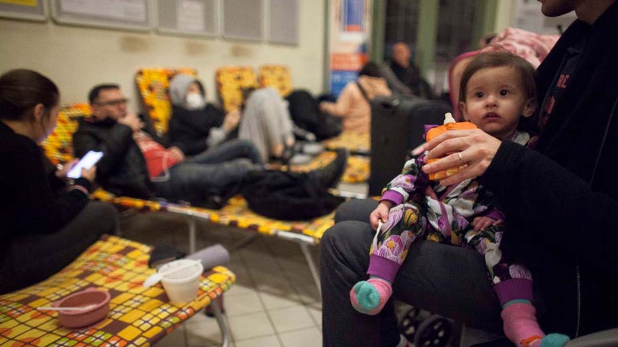 7   Churches outside Ukraine are organizing buses, vans, & private cars to go to the border to pick up exhausted refugees and bring them to safety. Some have also turned their campuses into refugee dorms. Some (like the Hertzog's home church in Bratislava) have rented houses where 20-30 refugees get food & shelter. Thousands of Christians are billeting refugees in their homes. Stephen and Patti were just at their church in Kosice, Slovakia, which is getting buses into Ukraine full of food and having them return full of refugees. Please take a look at this two minute video of church members loading a bus after Sunday service They are actually now raising funds to help them buy a 12-seat van to do this even more effectively, as well as deliver medical supplies. 8   Praise God the 60 precious ChildCARE Plus sponsored children in southern Ukraine are still all safe and sound. As the fighting intensified we thought it wise to evacuate them by train. Twenty from one orphanage were evacuated to Poland last week. Stephen and Patti are still trying to get the other 40 from another orphanage evacuated as Ukrainian officials have said the city they are in is likely to be a Russian target shortly.


9 Miraculously lines of communication continue to remain open for now so Stephen and Patti are still in contact with their national partners in Ukraine regularly. Thankfully, the banking system also continues to work so they are able to send support to help their partners buy food and other necessities. Prayer Requests:

Thank you so much for your love and concern for our dear friends in Ukraine. They cannot express how much they appreciate the prayers and support of their brothers and sisters in the West—now more than ever.