We are pleased to celebrate the news 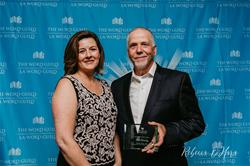 that Steve Kennedy, the former editor of our testimony magazine, and Jenny Svetec, a freelance writer for testimony/Enrich, came out winners at the 2019 Word Awards Gala in Hamilton, Ontario. The Word Awards recognize the best work published in the previous year in many categories of writing, including novels, non-fiction books, articles, columns, poems, song lyrics, scripts and screenplays. Steve Kennedy (pictured here with Lynda Schoffro, president of award sponsor Gospel Lighthouse Bookstores), won an award in the "Column-Single" category for his editorial "Making the Connection" which was published in the May/June 2018 issue of testimony. (You can read the article here.) Jenny Svetec won an award in the "Profile/Human Interest" category for her article "A New Canadian Missionary – The changing face of missions in a global society" which was published in the January/February 2018 issue.