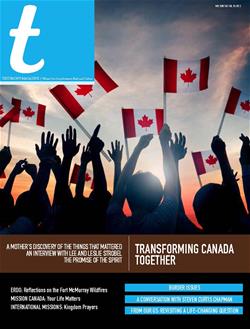 Have you heard about our prison sponsorship program? You can help us reach out to prison inmates across Canada by sponsoring a one-year subscription to testimony. Read more.

A year ago, wildfires were burning across the province of Alberta, and residents of Fort McMurray were fleeing their homes to save their lives. Ron Powell remembers the smoke and the smell that drifted south to his home in Edmonton. He remembers the dryness of that spring—and the dryness of his soul. And he remembers when the rains finally came. Read more.

Carol Ford used to regret all the things she wasn’t able to do with her boys when they were young. Then she discovered they had a profoundly different view of their childhood—one that has taught her a valuable lesson. [Full content available to subscribers.]

The year 2019 marks the 100th anniversary of the PAOC. Because the celebration of a milestone should always include the telling of stories, Brian Egert decided to go exploring. What he’s uncovered from our past has convinced him of the power of a story when it’s told. Read more.

Whether it’s been about immigration, national security or trade agreements, it feels like border talk has owned the news this past year. And, as we’ve seen, border issues can create a lot of tension. In this issue’s WORDVIEW, Randy Holm examines the border issues we find in Scripture and the tension that affects how we live out our faith in this world. [Full content available to subscribers.]

If you’re looking for some summer reading—or anytime reading, for that matter—here are two books to consider. Lisa Hall-Wilson lets us eavesdrop on her conversation with gospel recording artist Steven Curtis Chapman about his newly released autobiography, Between Heaven and the Real World: My Story. And Robert Osborne turns our attention to matters of the heart with his review of A Promise Kept: The Story of an Unforgettable Love by Robertson McQuilkin. We are sure you’ll want more of both of these stories. [Full content available to subscribers.]

STATING THEIR CASE—An interview with Lee and Leslie Strobel

The story of Lee Strobel’s investigation of the life of Christ is chronicled in his 1998 bestselling book, The Case for Christ: A Journalist’s Personal Investigation of the Evidence for Jesus. But in the recently released movie, The Case for Christ, viewers are told the moving personal story behind that story. Lisa Hall-Wilson talks with Lee and Leslie Strobel about the film, their faith, and the role of Christian apologetics. [Full content available to subscribers.]

ERDO: THE FORT MCMURRAY WILDFIRES—Reflections in the Aftermath of a Canadian Tragedy
A year ago, the community of Fort McMurray was devastated by massive wildfires. Homes and buildings were ruined; people were displaced. David Adcock, ERDO's chief executive officer, had an opportunity to visit Fort McMurray a few months ago and was struck by the stories he heard, and by the increase of the reputation of faith in the community. Read more.

MISSION CANADA: STEMMING THE TIDE OF TEEN SUICIDES—A Story of Hope Birthed in Lac La Ronge
In 2016, our nation experienced the devastation of teen suicides in the northern Prairie provinces. There were six teens between the ages of 10 and 15 who took their lives in a matter of two months, and many more who were rescued from attempted suicides. Laura Berg, one of the lead pastors at First Assembly Church in Medicine Hat, Alta. shares how the church there responded with the "Your Life Matters" movement. Read more.

INTERNATIONAL MISSIONS: KINGDOM PRAYERS—Part 1
The Lord’s Prayer calls for God’s people to pray that the kingdom of God will come on earth in the same way that it exists in heaven. That is an incredible invitation to participate with God and impact history from the human side. Murray Cornelius, executive director of International Missions for the PAOC, suggests six kingdom prayers that will assist people as they pray for our global and Mission Canada workers and all our partners around the world. Read more.

You can read all of the above articles (and more) by subscribing to testimony for only $24 per year (CAD) by calling 905-542-5400, ext. 3223 or emailing orderdesk@paoc.org. A digital version of the full issue is now available! Please also free to check out past articles from previous issues at testimonymag.ca.