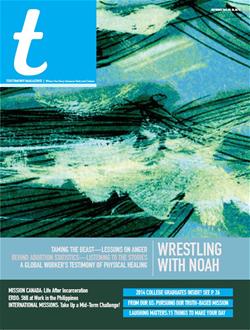 To learn more about our new bimonthly format, click here. Have you heard about our prison sponsorship program? You can help us reach out to prison inmates across Canada by sponsoring a one-year subscription to testimony. Read more.

FROM WHERE I STAND—Listening to the stories behind the statistics
The statistics on the number of unplanned pregnancies and abortions in Canada are disturbing. Terri Mazik works with the faces and lives behind the numbers. She is the executive director of First Place OPTIONS, a non-profit Christian charity offering support for families and for women who are facing unplanned pregnancy in Ottawa, ON. Read more.

TAMING THE BEAST—Lessons from the other side of anger
Ron Powell counted the cost one day and realized that he needed to deal with the issue of anger in his life. He decided that he could no longer allow his anger to destroy everything he loved. So he developed a process to make anger work for him instead. [Full content available to subscribers.]

BECAUSE WE MUST—A reboot of our intensive French language training program
To tell someone about Christ, you need to speak their language. Forty-five years ago, that simple truth led to the creation of an intensive French language training program called FLITE, one of the most important developments ever pioneered by our Fellowship. The need to reach the French-speaking population of our nation with the gospel has only become greater. That’s why it’s time to reboot. [Full content available to subscribers.]

MY PRISON & I—Dismantling the walls of a self-made prison
Not all prison walls are made of concrete and barbed wire. Sometimes the walls we feel trapped by are ones we cannot even see. But David Netmaker can tell you that the invisible ones are no less oppressive. It took him years to discover what his prison walls were made of—a discovery that ultimately led him to freedom. [Full content available to subscribers.]

ROOM A1—A PAOC global worker’s testimony of physical healing
tes•ti•mo•ny noun \ˈtes-tə-ˌmō-nē\ : proof or evidence that something exists or is true; firsthand authentication of a fact. Paula Bradbury is able to do simple tasks free from the pain that ruled her life for 22 years. That is testimony of God’s power and willingness to heal. Read the story of what happened to her in Room A1 at Dakar Academy. Read more.

WRESTLING WITH NOAH—Getting past the criticism to the questions
The movie Noah produced a flood of criticism from the evangelical Christian community. Scott Stiller went to see it and came home with a boatload of thought-provoking questions. [Full content available to subscribers.]

MISSION CANADA: THE MUSTARD SEED—Planting Simple Seeds of Faith
Debbie Fawcett served as the women’s reintegration chaplain with The Mustard Seed, a non-profit Christian organization in Edmonton, Alberta. She worked exclusively with women who had been federally incarcerated and helped prepare them as they returned to their communities. For the past four years, God used Debbie to make a positive impact in the lives of these women. She has since transitioned from this role to another organization, but shared a small part of her inspiring journey with testimony. Read more.

ERDO: STILL DOING GOOD—How our Faith is Still Impacting the Philippines
Typhoon Haiyan, which struck the Philippines on November 2, 2013, was a time of incredible destruction. The statistics are staggering. Sixteen million people were affected, with 6,201 deaths. The houses damaged or destroyed numbered 1.1 million, leaving 4.1 million people displaced. That’s only part of the story—the part you read about in the media. The days and months after the typhoon are a story of God’s miracles, of churches on both sides of the ocean coming together to give and to receive, and of people overwhelmed with thanks. Read more.

INTERNATIONAL MISSIONS: GETTING OUT OF THE COMFORT ZONE—Bringing Hope Through Mid-Term Missions
Craig Waddell is a mission volunteer currently serving in Zambia. Learn about his time there as he ministered in a new culture as well as about the STM Network and how it has benefitted his experience. Read more.