PCCNA (Pentecostal Charismatic Churches of North America) has launched three commissions to promote prayer, unity in the church, and to provide networking and support for Pentecostal / Charismatic Christians in Communications and Media.

Thirteen prayer co-ordinators and spouses representing eight PCCNA member denominations and organizations met for the inaugural meeting of the PCCNA Prayer Commission at the annual PCCNA meeting. The Commission began in 2014 with three denominational prayer leaders discussing the possibility of a Pentecostal pastors prayer gathering.

The leaders were P. Douglas Small, Church of God – Cleveland, Lou Shirey, International Pentecostal Holiness Church, and John Maempa, Director of the Assemblies of God Office of Prayer and Spiritual Care. Out of those discussions a powerful prayer gathering, Encounter 2015, was held in January in Fayetteville, NC. During those meetings Small discussed with President Jeff Farmer the need to raise prayer consciousness across our churches. “Could PCCNA provide a covering?” Small inquired. The PCCNA Executive Committee recognized the Holy Spirit was at work over two decades earlier when bylaw framers created the concept of commissions. The commission was approved and Small, Shirey, and Maempa were appointed chairperson, vice-chairperson, and recording secretary respectively.

The mission of the PCCNA Prayer Commission is “to create a context for fellowship, dialogue, and co-operation between the prayer co-ordinators of Pentecostal and Charismatic denominations, churches, and ministries in North America, under the auspices of the sponsoring organization. The Commission seeks to encourage intentional prayer leadership in member organizations and their congregations toward the goal of building houses of prayer for the nations with Great Awakening impact in view.” Fourteen prayer co-ordinators have been named.

The CUC goal is to assist PCCNA member churches and organizations in appointing liaisons to represent them in participating in the work of the Commission and other initiatives in the Body of Christ. Currently, in addition to those who attended the meeting in February, there are four other liaisons appointed by their organizations.

"The CUC will focus on training and resourcing liaisons in serving their organizations and the PCCNA in matters  related to unity," says Dr. David Cole, chairperson of the CUC.

The CUC recognizes a need to engage the important issues related to racial reconciliation, a priority of the PCCNA since its founding. The Commission also hopes to provide a place for conversations about the nature of the unity we seek as members of the PCCNA.  The Commission's steering committee anticipates a growing number of Liaisons who will participate in next year's meeting.

The Communications & Media Commission (CMC) was kicked off by representatives of the International Pentecostal Holiness Church, Church of God of Prophecy, Elim Fellowship, the National Hispanic Christian Leadership Conference, International Pentecostal Church of Christ and Highways Ministries. The mission of the CMC is to facilitate communication, networking and support for PCCNA members' communication teams. By sharing best practices and exchanging Good News testimonies, stories and events from our various movements, our united proclamation via multiple mediums shall empower the church to advance God's kingdom.

The commission has created a private Facebook group page and plans to publish a directory of PCCNA communications and media professionals as well as a web page with links to our members' publications and YouTube channels. The PCCNA Executive Committee approved creation of the commission contingent upon a letter demonstrating commission guidelines are satisfied.

PCCNA anticipates the launch of two or three additional commissions in the coming year related to racial reconciliation and NextGen ministry. 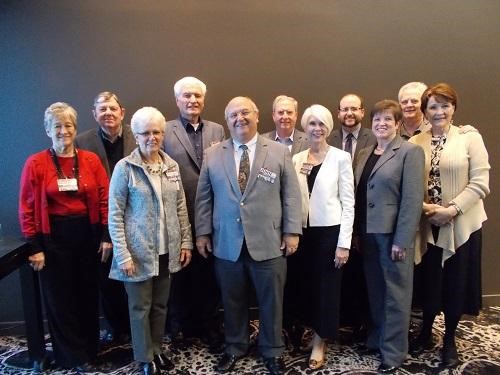