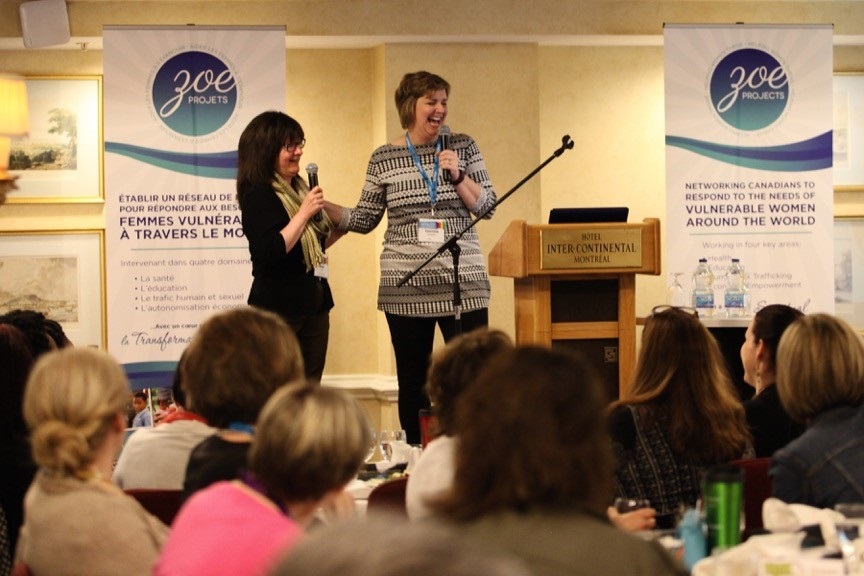 Leanne McAlister (right) and French translator Anne Yank speaking at the Women Revitalized luncheon at the Intercontinental Hotel on Wednesday.

More than 200 women gathered at the InterContinental Hotel on May 4 for the Women Revitalized luncheon, one of the events during the course of the week of General Conference 2016 in Montreal, QC. Leanne McAlister, director of ZOE Projects and the keynote speaker, shared on the history of women’s ministry in the PAOC and the direction it’s heading in for the future. Zoe Network was formed to link women together to share resources and opportunities for greater missional impact. Here are some thoughts from Leanne.

“The mission of God is all around us. God has invited us to participate with Him in it. We connect groups of women with the work we are doing overseas through our global workers and national partners. [We have a heart for women], for their spiritual transformation. Jesus said that He came that we might have life, and have it more abundantly. Canada, it is time to activate and mobilize.

“I am pleased to give leadership to the Zoe Network. I am the wife of Darcy and mama to three young adults. I am about to become a mother-in-law. I tell myself who I want to be, so I might need some reminders. I was raised in the PAOC. I was raised in a church where it was great to be a female. Women were equipped and free to respond to God’s calling in their life. When I was 12, I was leading worship. The first time I preached I was 14 years old. I got asked to speak to the adults. I have no idea what I said. But I borrowed from my vast experience. [Laughter.] But it shaped me, and it nurtured the call on my life. It wasn’t until I HIT pastoral ministry, and I do mean ‘hit,’ I realized that not everyone was keen to have women released. The role of women in church is quite complicated.

“In yesterday’s morning session, Dr. [Chris] Thomas reminded us who we are as Pentecostals. I was the one on the side going, ‘Yes! You heard me! Did you hear me?’  He said, ‘We know that women are gifted for ministry. There is no distinction based on gender or age or ethnicity. I will pour out my Spirit on ALL flesh.’ See, I love the gospel. I’m almost 50. The older I get, the more that I am understanding the gospel. The gospel melts down walls. The gospel makes the table large. It says EVERYBODY is welcome, EVERYBODY is gifted for ministry. Just do what God has placed on your heart.

"The gospel melts down walls. The gospel makes the table large. It says EVERYBODY is welcome, EVERYBODY is gifted for ministry. Just do what God has placed on your heart."

“PAOC Women are in an identity crisis. We do not know who we are. Think about this for a moment. Women are constantly given contradictory ideas of what it means to be a woman. On one hand we are told to be sexy. That is our ultimate goal. But on the other hand, we are told not to be too sexy. Be powerful, but just don’t get too pushy. We are told to sacrifice for our families, but then we are told to put ourselves first.

“Then it gets more complicated in the church. It has always been this way. For the first 800 years of Christianity, women were seen as the temptress. The culture just decided that men were ontologically superior to women.[1] But here’s the thing—the church never pushed back … that women have value. They didn’t do it. Then this weird shift happened in the 19th century, where women suddenly began to be lifted up. They were seen as sweet, delicate creatures. It’s interesting, because everyone has an opinion of what it means to be a woman. Some people think we need to go back to a Victorian ideal.

“So many people are confused about their role. I would meet these ridiculously gifted women. I would call them out, and say, ‘This is what I see in you. And it’s so obvious.’ And they would say, ‘No, no, that’s not me.’ I would meet women who were walking with Jesus for 30 years, and they couldn’t tell me what their strengths were, what their spiritual gifts were.

“If we read in Genesis, it says that the Lord says it is not right for the man to be alone ... ‘I will find a helper for him’ (Genesis 2:18, NIV). The older translations used the word ‘helpmate.’ When I was growing up, I translated that to mean ‘helper,’ or ‘secondary,’ or a ‘sidekick.’ But if you look at the original language, the word is ezer—one who shares all the roles—who assists, particularly when someone can’t do it. My husband’s standing right there. [Laughter.] It translates as ‘strong tower.’ It’s actually used for ‘God’ in Psalm 124. So are we ‘helpers’ or are we ‘warriors’?

“See, this is what the original plan was. And we know the plan was interrupted. As Adam and Even chose independence. And then we see the effects of the fall … and then the gospel. Christ came to restore and redeem everything that had been lost. He came to restore our relationship with Him, and he came to restore our relationship as men and women. He came to restore our identity—[so we can know] that we are image-bearers. We think we are an afterthought. But God uses both sexes to show the world who He is. This is not about women rising above men. This is about us linking our arms with our brothers, so that together we can be more powerful for the kingdom. God never gave up on his original dream, and neither should be.

“So, who are we as women in the PAOC? We are women called into God’s mission. God is at work in this world. And He is inviting us to participate with Him. Who are we as women? We are gifted uniquely for purpose. Sometimes I hesitate when I speak like this, because when I call women on [out], they automatically think they have to be me—to be something that they’re not. Let me tell you the truth today—God will stretch you, but He will never ask you to be what you are not. So stop comparing yourself to others, and be who you are.

"So, who are we as women in the PAOC? We are women called into God’s mission. God is at work in this world. And He is inviting us to participate with Him. Who are we as women? We are gifted uniquely for purpose."

“Who else are we? We are empowered by the Spirit. Everything we need to do what He asked is provided by Him. So be released.

“So we are doing a new thing, because God is doing a new thing. And sometimes we feel like we are disrespecting the past. Oh no, we are not. Because the mission remains the same. We started as women in the PAOC 101 years ago. And ministry and how it looks has changed often. And when God does something new, He actually builds on the foundation of what was. And so this is where we are now, but yet we stand on the shoulders of our mothers, and our grandmothers, our great-grandmothers, and great-great-grandmothers.

“This is weird for me because I was never a WM kind of person. There are lots of women like me—that don’t really want to be involved in “women-ny” things. And what I would ask of you is to reconsider…. You see the women of PAOC are incredibly diverse. We have at least 37 distinct cultural groups. Some are moms, some are childless, some are high-powered executives. Some love pink, others run and hide. There must be room for everyone. It is important that all types of women come together in the PAOC.

“God has surprised me. I actually left pastoral ministry to do this. God is doing something, and it’s incredibly exciting. The district women’s leaders were involved in this. Two areas emerged very clearly. The first area was mission. We knew that we needed to connect our PAOC women in Canada with the work that our global workers and partners were doing all around the world. So about four years ago we were in South Africa. So I was there to do a pastoral visit with someone who grew into one of my best friends. And that’s Marvelyn Shell. She was a global worker and she ran ChildCARE Plus. God was expanding her dream. She wanted to reach the moms of her sponsored children. And so she began to do business training with them so they could start their own businesses. One woman started her own bakery after receiving a loan. And we knew we had to connect more women in Canada to people like Marvelyn.

“There is a clear biblical mandate for leadership among women. Not shrinking back because of a lack of confidence, but confident because of the One who calls. We had a dream for women that they would learn to partner together. But if God is going to call PAOC Women into significant things, we need to get along. We have a vision for women with big capacity. We could see it. Can you see it?

"There is a clear biblical mandate for leadership among women. Not shrinking back because of a lack of confidence, but confident because of the One who calls."

“We will have four courses available in English and French. There will be a video component. The first course is in identity. We want to effectively disciple the women we lead … the final course will be available in January [2017].”

We exist to empower, activate and mobilize, through the power of the Holy Spirit, every PAOC woman into the mission of God, here in Canada, and abroad.

To learn more, you can visit www.zoenetwork.ca, where there is a newsletter sign-up.

Photo by Leslie Ghag. © 2016 The Pentecostal Assemblies of Canada.

[1] Ontology is the philosophical study of the nature of being, becoming, existence, or reality, as well as the basic categories of being and their relations.