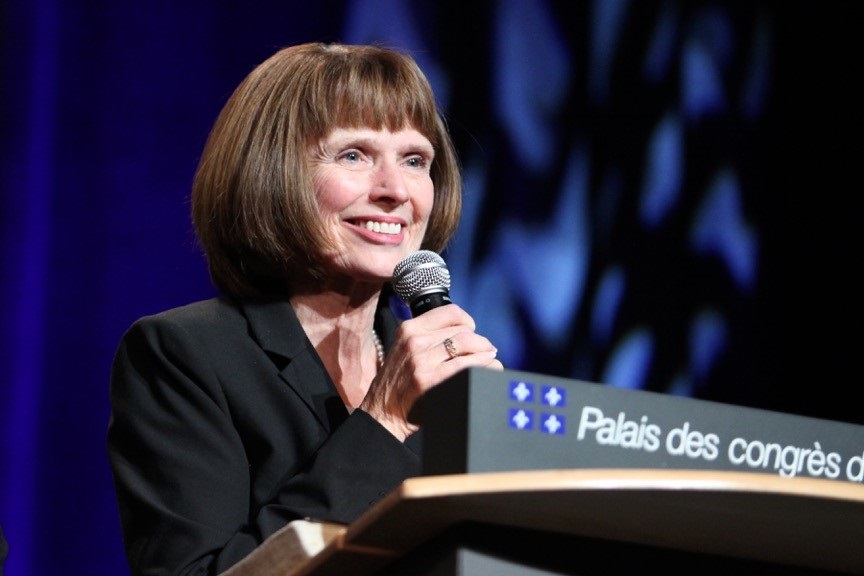 A special appreciation to the leadership of the PAOC for the opportunity to share this really special moment together. It was 39 years ago a week after we were married that my husband, David Grant, first took me to India. At that time he had been going there for nine years, and it was home for him. I had grown up in the Washington D.C. area. My dad was from New Brunswick. And my mom had wonderful, good German/English background. You have Christian, reserved, and conservative.

We landed in Calcutta, India. I met David’s adopted family, the Buntains. Suddenly my definition of compassion and ministry exploded. We began to walk with Mark Buntain. He was drawn compassionately to the most broken and marginalized. And I watched a man of God whose compassion was bold and courageous in a city of incredible, staggering numbers of poor and broken. Mark’s compassion was risky. Never boring. And it was absolutely inseparable from his passion for his Jesus. I saw him on the streets. And then I saw him on Wednesday and Sunday nights as he exploded in the pulpits.

"Compassion that comes from the heart of God is not neat and sweet. It challenges the gates of hell."

He stood in the middle of a place that is hell. The evil is tangible. It’s intimidating. It’s destructive. It’s real. [There were women trapped in sexual slavery whose children often hid under their beds as they served customers.] He called one day and said to me, “Can you take 37 little girls from age 3 to 12?” With no plan, no strategy, we knew these girls were in the heart of God. On the day they were born, He celebrated. The devil has destruction [in mind for them]. But Jesus has another plan. No matter the circumstances around a boy or girl’s birth, there is only one giver of life. And every woman and child in this world that is given life, was given life by their Father.

That night, with 37 little girls, Project Rescue was born. It was miraculous. With committed men and women of God giving them care and love. Within weeks, they knew Jesus. Within weeks they learned how to pray. Within weeks they were filled with the Spirit. They knew how to cry out to Jesus, how to pray in the Spirit. By five and six years of age. Those little girls began to intercede for their mothers for freedom. As their mothers saw how these little girls began to prosper, when they saw the love and care and concern their children were treated with, they began to dare to believe that there might also be hope for them.

Women started coming out of slavery and into freedom in Jesus Christ. For those 20 years, thousands of men, women and children have found freedom in Jesus Christ. They have found more than physical freedom. You see, slavery is more than physical. There are millions around our world tonight who are in sexual slavery, it is physical. Many programs are attempting to take women out of slavery into a safe place. But only Jesus can take the brothel out of the woman’s heart, mind and spirit. If anyone be in Christ, man, woman, boy, girl, they are a new creation. All things are passed away, and all things become new!

"Many programs are attempting to take women out of slavery into a safe place. But only Jesus can take the brothel out of the woman’s heart, mind and spirit."

Now they call other women out of the darkest places, to come out. “The Spirit of the Lord is upon me… he has anointed me to preach good news to the poor. He has sent me to reclaim freedom for prisoners, and recover sight to the blind, to release the oppressed” (Luke 4:18).

There is a missional purpose for Pentecost. People say to me, “We’re Pentecostal and proud of it.” Don’t tell me how Pentecostal we are in here … tell me how Pentecostal we are out there. The places where Satan reigns, that’s where we need His greatest anointing. Friends, we have an extraordinary opportunity now. And we have an extraordinary challenge. We live in a world of a growing sense of hopelessness. Breakdown of law and order, brutality, pornography. The enemy’s agenda is increasingly aggressive and destructive. It’s a storm. It’s a growing storm. And I would challenge us tonight. We can’t wait to get to God’s mission. This storm is not going to pass. There is something prophetic about the time in which we live. We cannot wait out the storm. The storm is the context in which God wants us to live out His mission. The storm is the new normal.

He did not die a horrible death for a fragmented redemption … Jesus died for the whole person. He cares about the whole person. We are not about counting souls. Jesus has called us to our community to save people. Whole people. People who need all of Jesus.

This past week in Spain, I was asked to pray for a young woman who is beautiful, but her eyes were dead. She was kidnapped at age eight by terrorists, and was a sex slave from the time she was eight. She is now reaching out for Jesus. But she needs more than Jesus to touch her spirit. She has been destroyed body, mind and spirit by the enemy. And as she stood there, dead, because something in her has died to survive being raped, day after day after day, as I held her in my arms, and began to pray over her, I cried out to Jesus. Because the death I saw in her eyes, the bondage, the trauma—she needs all of Jesus. She needs all of His promises. She needs the whole gospel. She needs to hear His word preached. She needs to be discipled. But she needs compassion. She needs life changing compassion.

They need the whole gospel—of all of us. Doing what God has called each of us to do. Without trying to balance the principles of ministry. How can you balance something that is all one? God has called us to do what we are to do with everything that is within us, and not to prioritize one another’s ministry. Jesus will do what only He can do.

Our daughter, Jennifer, was a nursing student, and in college, she wanted to go back to Calcutta. She wanted to volunteer at Mother Teresa’s home for the destitute and the dying. I knew it would be tough … high, high heat, no electricity, women brought home on pallets to die with dignity.

One day, I asked her how it was going. She said, “Mom, today I had a decision I had to make. As I was there today walking among the women, as I was there trying to wash people, something very disconcerting happened.” Women would start to clutch at her long skirt. But we Americans like our space. We like our private space. She said, “My first reaction was to pull away and try to keep going.” The she said she asked herself, “Wait a minute, why am I here?” She decided that the first woman who clutched her skirt, she would stop and kneel down. There was one woman who was dying. She’s female in a male culture. And now she is in the last part of her life. She said, “As I knelt down beside her, she took my hand and she pulled it close to her face.” She didn’t even know if this woman could physically see her. But she pulled her hand and pressed it hard against her cheek. She said, “Mom, I suddenly realized, she just wanted human touch. She wanted to feel my hand on her face. But mom, I had on my sterile gloves.” Like all good Western nursing students, she had worn sterile gloves. “I had to decide, there’s lots of disease—there are all these problems. But how could I touch those who are dying with sterile gloves?” She said, “Mom, I took them off. I took them back to the suitcase. I just have to trust Jesus. I can’t come all this way where people are dying and want people to touch them, and wear sterile gloves.”

Church, ministers, men and women of God, our world is desperate for the touch of Jesus Christ. God help us not to leave on our professional, sterile gloves. Sometimes we go to the ends of the earth, but still don’t come close. We must come close. Our Father’s heart is broken. Taking off the gloves is risky, but He has called us to be Jesus. I am so thankful that Jesus didn’t come to Beth Grant with sterile gloves. It’s time for the whole gospel. It’s time for His anointing to empower us. It’s time for a powerful, fresh anointing on us to do His mission. And it’s time for us to come to the most broken. The Spirit of the Lord is upon us. Let us come close to our Father’s heart, so that we can come close to the people He has called us to touch.

"Church, ministers, men and women of God, our world is desperate for the touch of Jesus Christ."

Jennifer had the worst case of parasite she ever had. But we can handle that … whatever the risk, we must obey, and courageously, do what God is calling us to do, without hesitation, without fear. Taking steps of faith we have never taken before. It’s the night of the storm… it’s going to get darker … but this is God’s day. As we step out in faith together, captives will be set free. Thank You, Jesus. Hallelujah. And to God be the glory.

Photos by Leslie Ghag. © 2016 The Pentecostal Assemblies of Canada.