“So I sought for a man am 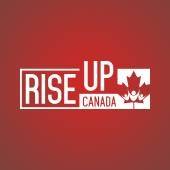 ong them who would make a wall, and stand in the gap before Me on behalf of the land, that I should not destroy it; but I found no one” (Ezekiel 22:30, NKJV).

Looking through the historical lens of our nation, it is evident that Canada was given to early Catholic and Christian forefathers who have toiled hard to build up this nation. Their prayers and strong biblical principles in mind have heavily influenced Canada. These honest, hardworking, men and women of God believed in the principle and teaching of Christ and were blessed. We live in a time where even the Canadian national anthem is being questioned and scrutinized for mentioning God. Canada is desperately in great need of prayer. Read this invitation from Rev. Stewart Hunter and consider joining this prayer initiative on October 6, 2018.

The live event will take place from 9 a.m. to 4 p.m. in Ottawa, Ontario, and will be live streamed on www.ustream.tv/ruc.

Visit www.riseupcanada.org to learn more. You can also call 416-439-7001 or email admin@riseupcanada.ca.

RISE UP CANADA: A Letter from Stewart Hunter

“Innovation and change” are commonplace these days. Or, is it “change and innovation”? Does innovation bring change, or does change result in innovation? Evokes memories of which comes first, the chicken or the egg. Whatever…

But, what is not indisputable is that newness is “in.” “Sameness” is out. Think about it! Everything from how we get around to what we eat; everything from the mattress we sleep on to the Beluga Whale planes we fly on shows change!

For Christians, however, some things remain the same. Our God never changes! His Word remains constant. And His invitation for His people to seek Him, to worship Him, to call unto Him, to trust Him, never changes.

The Bible from cover to cover has so much to say about prayer and fasting. All the way through biblical history from the Patriarchs to Jesus and the writers of the New Testament we see victory after victory when God’s people prayed, fasted, believed together and called on His Name.

And we could fill library shelves around the world with books on prayer. There’s no shortage of the “why, the when, the how, the where, the how long” of prayer. My personal observation including in my own life is in the “doing” of prayer, or the lack thereof.

When Pastor David Loganathan first brought to me the “Rise Up Canada and Pray” concept I was thrilled. This initiative is starting here in the nation’s capital, symbolically the heart of Canada. The halls of government are here as are the embassies of countries around the world. Power and authority emanate from every capital city. But, not “All power and authority!” Those reside in Jesus alone.

And we will gather to invoke not only His blessing upon Canada; we will assemble to praise Him for this country and to ask Him to stem the tide of secularism and apostasy that are so prevalent today.

This “Rise Up Canada and Pray” emphasis is also crossing denominational lines. I embrace that! Unity with diversity is only going to result in a great move of God’s Holy Spirit.

My prayer is that every pastor, every staff member, every local church leader, member, and adherent, young and old, will participate in this event coming to Ottawa on October 6, 2018.

Remember the encouragement in 2 Chronicles 7:14, “If my people, who are called by my name, will humble themselves and pray and seek my face and turn from their wicked ways, then I will hear from heaven and will forgive their sin and will heal their land.”

“Our Father who art in heaven…”