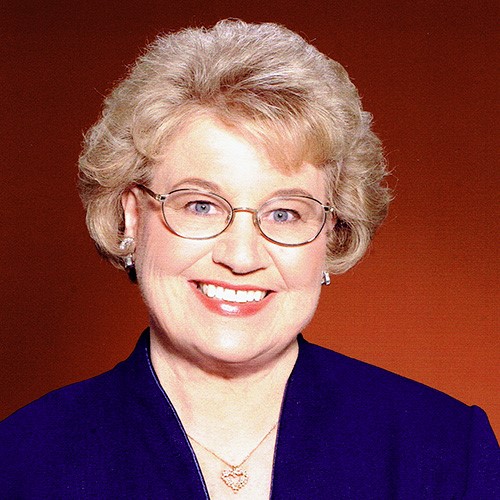 Anna Hayford, an ordained Foursquare minister and wife of renowned Foursquare Pastor Jack Hayford, went to be with the Lord today. She was 83 years old.

A graduate of L.I.F.E. Bible College (now called Life Pacific College), Anna sensed God's call to ministry as a child, becoming an effective and beloved spiritual leader. Pastor Jack, who served as Foursquare's president, once called her "the fountainhead" of his life.

“The Foursquare family has lost a person of tremendous influence,” says Foursquare President Glenn Burris Jr. “Anna Hayford possessed keen spiritual insights that encouraged many over the years. While not as publicly recognizable as her husband, she supported and multiplied his ministry. The legacy she left through her children, grandchildren and great-grandchildren, as well as the churches and other places where she ministered, will continue for generations to come.”

The seventh of nine children of Elmer and Emma Smith, Anna Marie Smith was born on March 31, 1933, in North Platte, Neb. Growing up on a small farm and taken to a Foursquare church in infancy, she received Jesus as her Savior at the age of 8, and the baptism with the Holy Spirit a year later. She immediately felt God turning her heart toward the work of ministry, which prompted her to enroll in L.I.F.E. after graduating from high school. She earned her three-year ministerial diploma there and was active in leadership, serving one year as vice president of the student body.

Anna and Jack met on campus at the start of the 1952-1953 school year; by that Christmas, she went to Oakland, Calif., to meet his parents. After an 18-month-long engagement, they married on July 4, 1954. The couple would go on to have four children and 11 grandchildren, with their extended family eventually reaching several dozen people.

After graduating from college, Jack and Anna moved to the Midwest for a short-term position promoting summer youth camps and encouraging youth ministry in local churches in what was then called Foursquare's Great Lakes District. By the spring of 1956, they agreed to plant a church in Fort Wayne, Ind., a region where few people knew of The Foursquare Church. Despite their isolation from other denominational works, the couple threw themselves into their mission.

Anna retained an appreciation of her down-to-earth origins, once saying, "Living is a lot easier when you're truthful about who you are and where you've come from instead of trying to put on a façade."

Pastor Jack taught youth and adult Sunday school, while Anna taught children and even developed her own instructional materials. In addition to conducting children's church, Anna led congregational singing. She also gave birth to their first two children during their four years there.

Anna would give birth to their last two children after she and Jack returned to California in 1960. Jack worked as Foursquare's national youth director, and then as dean of students at L.I.F.E.

Although child-rearing duties meant Anna spent more time at home, after Pastor Jack accepted a call to pastor the First Foursquare Church of Van Nuys, Calif., in 1969, she helped train and instruct leaders. Later, she led the singing of traditional hymns during worship services, for more than 20 years. After modest beginnings and being renamed The Church On The Way, the congregation experienced explosive growth, eventually reaching 12,000 members.

Yet through it all, Anna retained an appreciation of her down-to-earth origins, once saying, "Living is a lot easier when you're truthful about who you are and where you've come from instead of trying to put on a façade."

Not only was that one of the qualities that attracted Pastor Jack to her, this outlook endeared her to the rest of the Foursquare family.

A memorial service will be held on Saturday, March 18 at 1 p.m. at:

The Church On The Way in The Living Room