Formission Videocast - What Is Christian Discipleship?

An Interview with David Wells by Formission 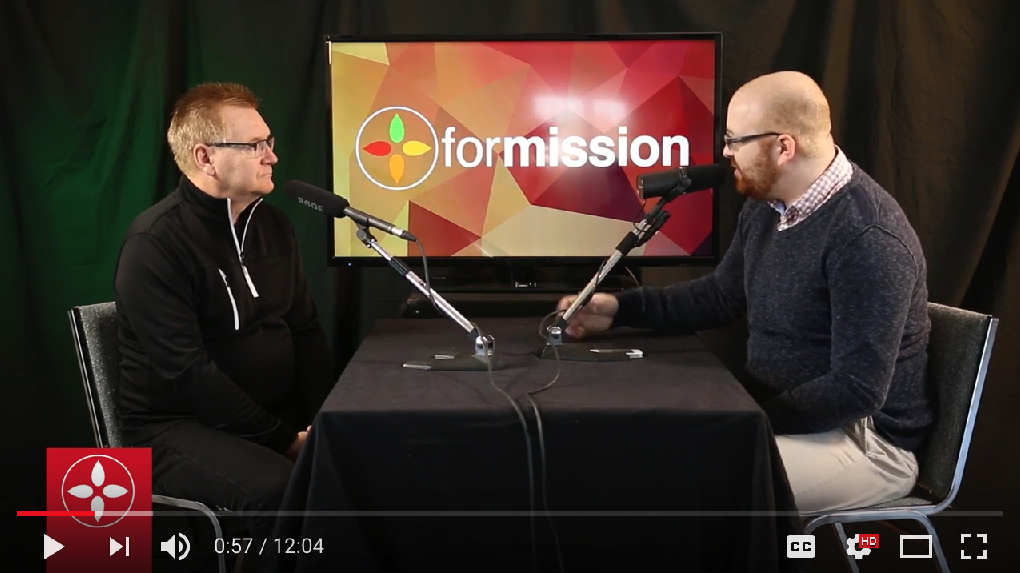 Formission host David Kentie of the Pentecostal Assemblies of Newfoundland recently sat down with David Wells, our general superintendent, to discuss what discipleship looks like in a Canadian context.

David Kentie: “Well, welcome to the very first Formission podcast of this year. A special time as well because this is the very first video cast that we’re doing and also special because I am joined by the general superintendent of The Pentecostal Assemblies of Canada, Dr. David Wells, am I correct with that?”

David Kentie: “David you were recently re-elected as the general superintendent in Montreal was it?”

David Wells: “Yeah, early May, so I’ve had the privilege of serving for two 4-year terms and now we’re into our third, so excited about that and have good strong sense of direction and vision so, you know, ready to go and I’ve got a great team around me so away we go.”

David Kentie: “Excellent! As you know this is for the Formission initiative as part of Pentecostal Assemblies in Newfoundland and Labrador and part of the Formission is our emphasis on discipleship within the local church not only for pastors but also for lay people as well. For you, having done studies and having pastored and being at the executive level, what is Christian discipleship for you?”

David Wells: “First of all, I just want to really commend the PAONL for continuing the strong focus on disciple-making. I’ve co-operated with the gang here actually for several decades now in the whole question of disciple-making and the processes that [are] being followed so first of all a strong commendation for that ongoing initiative. Our mission is to make disciplined followers of Jesus, so you better think it through a little bit about what is that? I’ve come to peace that, first of all, it’s an intentional process because it is our mission, so there needs to be this intentionality that we make disciples, and with that, then you better understand what is a disciple. And so, to me, disciple-making is, first of all, a Spirit-empowered process, so [its] intentional. Spirit-empowered in the sense that we are talking about lives being transformed, about being shaped in the image of Jesus. Well, I can’t do that in my own strength, you know? I couldn’t even get my kids to clean up their bedroom, better yet, you know, try to transform a person’s life. So, you know, it does take Spirit-empowerment to see that happen, it’s the Spirit that brings change into people’s lives. And I think it’s been as Pentecostals we need to park on that even a little bit more than we do. There is a difference about what the dynamic of the Spirit brings to making disciples. So, this intentional, Spirit-empowered process, it’s a relational process. So, we are talking about people willing to share their lives with others, so that they can see what it looks like to, like Paul says in the Thessalonians: “We were happy not only to share with you the gospel but our lives as well," because that’s what it takes to make disciples so it’s this sharing of life over a time period, there’s a process to it. And none of us is totally there yet, I’m not totally there yet, you’re not totally there yet, well, assuming.”
[Smiling]

David Kentie: “I’m pretty sure that’s a no in my part.” [Laughter]

David Wells: “So, you know, the process, it’s important to think through right from the very beginning when somebody doesn’t even yet know Jesus. That’s part of the disciple-making process and it is relational so it’s how do you first connect with people who don’t know Jesus? You know, from Justin Trudeau, they don’t know. So how do you connect with people right through there, see people come to faith. How do you help them grow through all these stages of maturity? All of this is part of relationally based process so it is important to think it through in an intentional way.”

David Kentie: “Can I touch on that a little bit? It starts prior to really that conversion experience. So, in a way, you’re saying that discipleship is even before they have made a full-on kind of commitment, you’re already starting in that journey along. Is that a dynamic shift from where we’ve been in years past where we’ve said, you know, kind of believe, without saying, discipleship sort of starts after you come to the altar and you say the prayer and do all that stuff, is that a shift there?”

David Wells: “Yeah, I do believe that the danger has been that when you see it just afterwards then we tend to make it programmic, ‘now you’re going to be part of our discipleship’ program and it’s almost always then understood to be in a room somewhere for a certain period of time, you know, a quarter certain number of meetings. So I appreciate in the initiatives that help us in the journey of making disciples that, let’s say an Alpha or something, you know you can use dozens of programs but throughout these they have their benefit but to understand, they’re not discipleship per say. Disciple-making is this long-term relationally based process, the Spirit helping us to see people right from before knowing Jesus, all the way through to the final day. And so with that in mind, I think that [in] the Pentecostal world, we’ve been somewhat content that we have programs and we have rooms booked and we have a certain number of people coming. Did that always help us to make disciples? That’s a good question. I think that we need to evaluate because the reality is, and my challenge to leaders especially, is that you don’t really understand what it takes to make a disciple in Canada unless you start at the front end by knowing people that don’t even know Jesus right now and understand some of the concepts they have about spirituality and about who Jesus is and on and on the list goes. You don’t really understand discipleship in the light of people who do know Jesus but live in totally different context than what’s, say, I know is a Christian leader, or my salary is paid by, right now, a Fellowship of churches, but in the local church, you can get so boxed off into that world that to you, discipleship is people come to us, we get them in a room, we tell them how to further live. What does it look like to go be among and walk alongside of people who, all the way from don’t know Jesus at all, to right through to even some of the folks who are in the life of our church, but do you know what they’re living through in their professional world or in the context that they’re addressing? So that’s why, if we’re following Jesus as our leader and disciple-making, He went and 'lived among' full of grace and truth, that’s how He made disciples.”

David Kentie: “Yeah, and you look at the life of Jesus Himself and going into these situations where He is among the tax collectors, He is with the outcasts of the outcasts of the outcasts, the people nobody wanted to touch. And He started with this ragtag group of people that didn’t fully click and understand what, why, and how He came and through that process, through that three-year process, the Pentecost and the Spirit came and just kind of everything starts to sort of light up, but it took that three years to get to that point, and even then they still needed the Spirit to come and illuminate them I guess in that sense.”

David Wells: “Yeah. And it’s important, I mean I was strongly shaped by leaders who, first of all, engaged me in a relational process as a young person in faith, as a young leader later on, you know, this ongoing mentorship and being made a disciple by people who invested their time. But they also pointed me towards understandings of ministry through books like Master Plan of Evangelism by Coleman or Training of the Twelve by Bruce, and you know, they kept pointed towards ‘now how did Jesus go about ministering’? What where his priorities? So I remember, for the early part of my ministry, I was in the Gospels every day and I developed these home manuals about, I called it Ministry Jesus Style, and it was just for my own benefit over three years going to a harmony of the Gospels and tracking and just making notes of ‘if Jesus physically lived in Canada today, how would He spend His time, His energy, and His money’? So, you know, it’s kind of out of that came this understanding of intentionality about making disciples and how He went about it, [what] He gave the best of His time to. And here, you know, all these years later, I’m still trying to live out those values, yet you know I’ll be leading a number of churches. You know, you can easily be locked in an office or some people call it an ‘ivory tower,’ I’d rather lead from the streets than from the office partly because of my commitment to disciple-making. It’s like I’ve got to know people who don’t know Jesus, I’ve got to be with them, I’ve got to understand what makes them click and why is it that they are becoming followers of Jesus. I’ve got to have real names to tell you about real stories, you see, and all the way through to people that are new in faith and people that are struggling, still broken, all the way through to having mentors myself that have inspired me even today.”

David Wells: “Well, I don’t think anyone again intentionally says ‘I don’t want to have people in my life.’ I sometimes talk about the vortex of the existing church and I, you know, you don’t have to follow me around much or hear me speak that I believe in the church and I believe in what we do, in visible disciple-making communities, but even in our own circles we’re using the phraseology more visible disciple-making communities than just church because church has ended up being defined by more the institution, more the building, more the structure that we’ve established. There’s a lot of good things that go on in the life of the church, there’s a lot of value to dynamic worship gatherings and word-based teaching, don’t get me wrong, and all those things, but it has to be led by people that know that that’s not it in the end. It is about 24/7. It is about bringing Jesus to people and if I don’t model that, I’ll be frank, I don’t feel I have the creditability to then stand up in front of a group of fellow believers and tell them ‘now go and make disciples and go to your neighbours’ but I don’t have a clue who mine are, or I don’t know what the struggle of that is or that the different views of spirituality we’re now dealing with in Canada. If I can’t authoritatively tell you about people in my life, where I’m learning those lessons, what right do I have to get behind a pulpit and tell people to do what I’m not doing. I just think it’s a credibility issue.”