I am convinced that women have a shared calling to ministry in the body of Christ. Over the years, I’ve worked through all the scriptural, theological, philosophical and cultural considerations in order to come to this conviction. On a good day, I could recite most of them. But something happened recently that further deepened my conviction.

My mom passed away.

We need clear theological and philosophical bases for our convictions. With that understood, I’ve learned that those convictions need to be fleshed out in the crucible of relationship and experience. In fact, if they are not reinforced in real life, they are no more than items of mental assent and do not pragmatically influence our lives.

So, when I think about the shared place of women in ministry to God and in the body of Christ, actual people come to mind—and none more than my mother, Ruth Wells.

My mom was not concerned about having a platform from which to publicly proclaim her biblical insights. Nor was she the kind to serve at many decision-making tables. That being said, she certainly expected that women who were so called should have the freedom to do so. She believed strongly in the expression of the Spirit’s gifts through both the daughters and sons of God. If the evangelist was a woman named Eunice, or the worship leader’s name was Ruby, that was great. Mom’s daughters and granddaughters knew they were free to be whomever God wanted them to be. 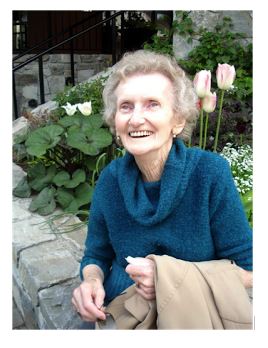 "She believed strongly in the expression of the Spirit's gifts through both the daughters and sons of God."

Mom herself was from a generation where women were expected to marry, bear children, and then raise those children with love and discipline. She did all that admirably. Yet in the mid-1960s, with five young children, economic circumstances and her strong sense of responsibility motivated her to find full-time work outside of the home. That did not stop her, though, from volunteering at our church, or from managing a house filled with hospitality and food, or from helping her children—and then her grandchildren—to do their homework and get to their music, school and sporting events on time.

This life of sacrificial service found its roots in the deep relationships of a close-knit Danish immigrant community. Mom’s mother passed away when she and her two sisters were young, eight years old and under. Their relatives and the community rallied around her father and the girls. On immigrant farms in the 1930s and ’40s, there wasn’t a lot of debate regarding roles and responsibilities, especially when tragedy came knocking. Life was about survival. Everyone worked—young and old, men and women. Family looked after family; neighbour looked after neighbour.

Those values of mutual respect, hard work, hospitality, and love for God and neighbour carried over into her marriage, family, church and community. One man who knew my mom when he was a college student wrote, “Mom Wells will always be in our heart and our thoughts. I will never forget how this angel took care of me when I was without a place to live. She fed me when I was hungry and gave me shelter. She truly was my angel.”

No one had to tell my mom she was free to live out her calling to minister. Who was going to tell her otherwise? Anyone who knew her understood that there was steel under that velvet!

I pray for a whole new generation of Ruths, women whose calling by the Spirit is rooted in a deep love for God and people, women who do what they are called to do tenaciously—no matter what anyone else says!