Watch this video impact report by More Than Gold 2015 highlighting work done during the Pan Am and Parapan Am Games. 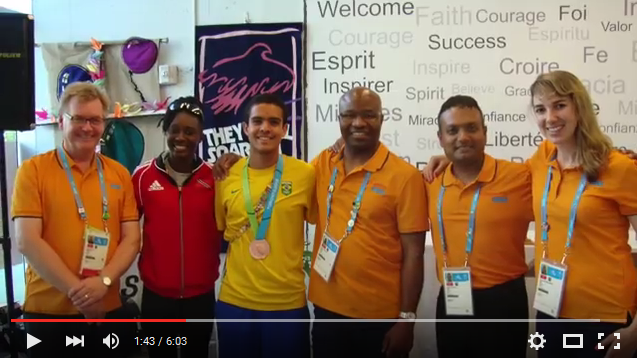 This summer, the PAOC sponsored a Pan Am/Parapan Am outreach, More Than Gold 2015. The goal of More Than Gold 2015 was to “mobilize the Christian community to serve through generous hospitality, social care, outreach and active prayer, demonstrating the relevance of the church today and leaving a legacy of Christian love beyond the 2015 Games.” Over a three-year period, more than 1,100 people participated in leadership and training for the 2015 Games. Among these attendees, 60 people received KidsGames training, and over 400 people received hospitality training.

A total of 17 denominations with over 30 agencies were involved in the 2015 Games. Sixty games pastors served at 13 locations, and over 250 mission team members provided their help at the Games. A multifaith centre opened in the Athletes Village. At this centre, prayer and Bible studies were held three times a day to more than 3,600 Pan Am and Parapan Am Games visitors. This was all done with the help of 42 volunteers for the Pan Am Games and 28 volunteers for the Parapan Am Games. PAOC General Superintendent David Wells was among the volunteers.

Outreach was a very important part of the 2015 Games. A total of 554 “Pretty Bags” were assembled for outreach, 6,000 New Testaments were moved into the Athletes Village, and 35,000 Gospels of John were received in four languages. Over 4,000 New Testament Bibles were handed out to staff, athletes and volunteers. Four hundred and thirty-five thousand cups of cold water were distributed to people in Jesus’ name. At the end of the Games, a total of over 70,000 Gospels, magazines and mini-magazines were handed out! Thirty-four street level workers who provided 26 nights of outreach during the Games made this possible.

Children were also encouraged to participate in activities. Over 45 KidGames and Sports Camps were held during the 2015 Games. The first-ever Parapan Am Kids Camp was hosted this summer. These camps ensured that over 3,000 children heard about Jesus!

More Than Gold 2015 was made possible with the help of the volunteers who provided 5,484 hours of service. It was also made possible by the help of everyone who kept the 2015 Games in their prayers: 168 hours of continuous prayer helped to keep the outreach and hospitality going.