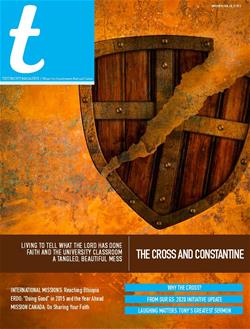 Have you heard about our prison sponsorship program? You can help us reach out to prison inmates across Canada by sponsoring a one-year subscription to testimony. Read more.

WAS BLIND, BUT NOW I SEE—Living to tell what the Lord has done

We think of prison cells as stark, uncomfortable places to live. Dino Mazzone’s was dangerously comfortable. In fact, it took a tragic event to open his eyes to the fact that he was living in a prison cell. Here he tells us the story of that event and what the Lord has done through it. Read more.

In 1978, a young man named Efa Etoroma left his home in Nigeria to attend university in Winnipeg, Manitoba. Almost 40 years later, Dr. Efa Etoroma is an associate professor of sociology at Concordia University of Edmonton, Alberta. It’s safe to say that he has found a home here in Canada as well as his calling. [Full content available to subscribers.]

Most of us have recited it countless times. It’s used in church services, at funerals—even at public gatherings. As with most things that get repeated over and over, it can easily be reduced to a ritual, something we do or say but never really think about. Robert Osborne challenges us to look a little deeper into this gift Jesus gave us called the Lord’s Prayer. [Full content available to subscribers.]

WHY THE CROSS?—The meaning of the crucifixion in the plain language of Scripture

The cross, simply put, was a brutal instrument of Roman execution. For the past two millennia, it has also been the primary symbol of the Christian faith. In some theological circles today, the meaning of the cross is being questioned. Garry Milley looks at what he calls the plain language of Scripture to answer the question, “Why the cross?” [Full content available to subscribers.]

A TANGLED, BEAUTIFUL MESS—Living out God’s love for the orphan

In the very best of circumstances, raising three adopted teenagers is not a task for the faint of heart. Throw into the mix a clash of languages and cultures, add a large portion of painful history, and you have a recipe for what Tonia Pankova calls “a tangled, beautiful mess.” Here is the story of one family’s attempt to live out God’s love for the orphan. Read more.

While some Christians view the changing Canadian political landscape as threatening, Randall Holm believes it is a time to be optimistic. The demise of the long-standing social contract between church and state, he suggests, offers an opportunity to live out what it truly means to take up our cross and follow Jesus. [Full content available to subscribers.]

INTERNATIONAL MISSIONS: JESUS IS BUILDING HIS CHURCH!—God's Spirit at Work in Ethiopia
God’s Spirit is moving mightily in Ethiopia. Since the fall of communism in 1991, the church has grown significantly. Jeremy Feller, PAOC global worker to Ethiopia, shares some stories about how God’s Spirit is working and encourages us to celebrate how Jesus is building His church! Read more.

ERDO: ERDO AT WORK—"Doing Good" in 2015 and the Year Ahead
In December 2015, as one of 86,000 registered charities in Canada, according to the Financial Post’s criteria, ERDO was recognized as one of the “Top 25 Charities of the Year” for the second year in a row. Learn from Carol Froom, ERDO's director of resource development, about the work ERDO was involved in throughout 2015 and what the future holds for this ministry. Read more.

MISSION CANADA: UNASHAMED—How Do You Feel About Sharing Your Faith?
Hear from Brian Egert, director of Mission Canada and assistant to the general superintendent of the PAOC, as he unpacks the findings of a recent study on Christian spirituality, including how people share the gospel. Read more.

You can read all of the above articles (and more) by subscribing to testimony for only $24 per year (CAD) by calling 905-542-5400, ext. 3223 or emailing orderdesk@paoc.org. A digital version of the full issue is now available! Please also free to check out past articles from previous issues at testimonymag.ca.