The Mission of International Missions is to glorify God by making disciples across cultural boundaries by proclaiming and practicing the gospel of Jesus Christ in the power of the Holy Spirit.

On November 7, 2021, church communities all over the world will pause and pray for Christians who are persecuted and suffering for their faith.

Over 340 million Christians around the world are persecuted for their faith in Jesus. Each day in the month of November, International Missions invites you to pray for the top 50 nations where persecution of Christians exists.

November 7th, 2021 is the International Day of Prayer for the Persecuted Church. 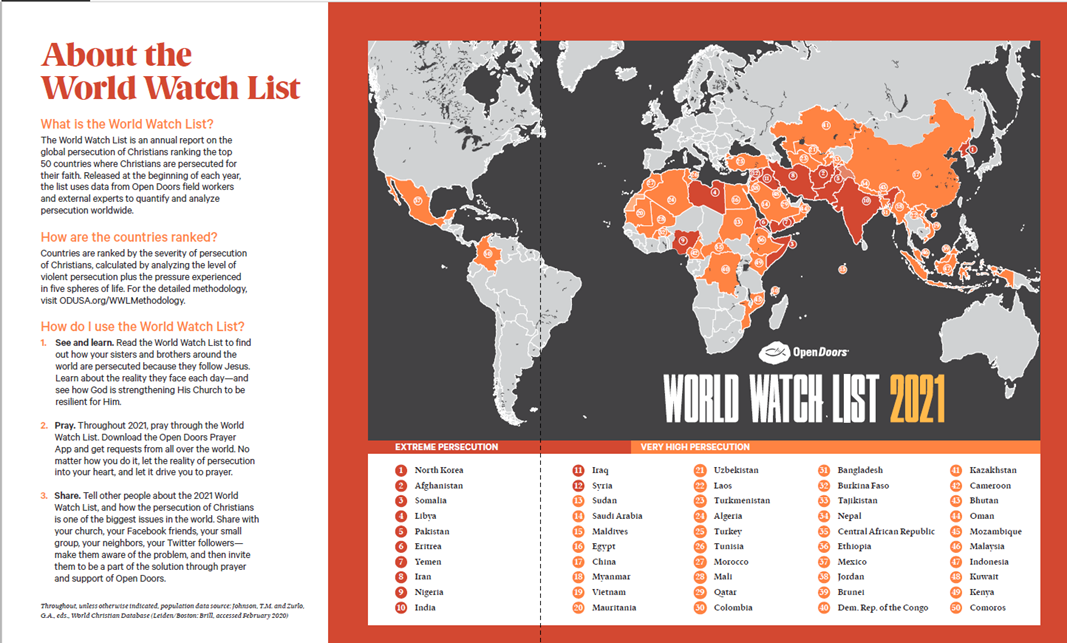 “Is it possible to embody a personal Christian faith apart from embracing a personal certain risk, and am I required to share in Christ’s sufferings?”

“I want to know Christ and the power of His resurrection and the fellowship of His sufferings…” (Philippians 3:10, BSB).

“Therefore, since we are surrounded by such a great cloud of witnesses, let us throw off everything that hinders and the sin that so easily entangles. And let us run with perseverance the race marked out for us, fixing our eyes on Jesus, the pioneer and perfecter of our faith, who for the joy set before Him endured the cross, scorning its shame, and sat down at the right hand of the throne of God”  (Hebrews 12:1-2).

As evangelical Christians, we often speak of our personal faith. We ourselves made the decision to follow Christ, so it is indeed personal. But what else might we have assumed it means or does not mean for us individually? Is this faith something we think we own? And does that mean we get to define its impact upon our own lives? Or is the precious gift of this Christian faith something given to us with a set of parameters defined by Jesus, wherein the promised transformation is tied to the embracing of risk in unwrapping the package?

While you ponder this, consider a current true story:

Raised in the devout home of a privileged Muslim family in a fundamental Islamic state, Ahmed caused more than a little alarm when he chose Christian faith. In his third year of university, he began to visit the home of a businessman whose daughter he was interested in meeting. One evening while visiting, he noticed his host watching the Jesus film, and Ahmed joined him. Ahmed was quite surprised and questioned the man concerning the film. That night, Ahmed had a dream in which Jesus appeared and spoke to him. He did not understand what it meant, and it occupied his mind constantly. Then it happened again. After experiencing the dream for a third time, he began to quiz this businessman about the prophet Isa (Jesus), at the same time chiding the man for exposing him to this forbidden film. His friend encouraged him to continue seeking and then introduced Ahmed to another man. This second man answered his questions so thoroughly that Ahmed decided to follow Jesus. When his family heard of it, Ahmed was accosted and threatened by men who put a machete to his throat, leaving a scar. On the verge of being arrested and imprisoned, an older brother intervened, and Ahmed was able to escape his birth country. While being discipled in his new faith, he himself began discipling seekers from his own nation. During the ensuing years, new believers would, at times, travel across the border to meet him. Sometimes Ahmed would risk venturing back to his own country, secretly discipling them to deepen their faith. Early this year, while engaged in teaching several men, they were all discovered and arrested. At last report, Ahmed was awaiting trial in his birth country, with his wife and children left behind in another, but there was some hope that he may be shown leniency.[1]

What can we say about a common faith that has cost Ahmed so much, yet costs us so little? In the most basic of faith realities, millions of followers like Ahmed risk their lives daily to pursue this Jesus whom they have trusted as Friend and Saviour. We might think similar things about our journey in faith, but our reality is profoundly different. Most persecuted believers in our world have little theological learning on which to ground their spiritual confidence, yet they face risk in obedience to Christ willingly, if tenuously. They choose to rest their lives in His hands,[2] a decision which places them beyond the edge of personal safety. For them, it is the normal Christian life. They rest in the knowledge that Jesus has made them His own and has promised to keep them, no strings attached. Yet, in the view of a faith considered personally owned in safer contexts, there must be an assumption of strings attached—or we would not refer to endangered Christians as suffering or being persecuted. A faith defined by the notion that it is ours to personally direct easily rejects what may have been Jesus’ missional intentions for us. The contrast in these attitudes toward following Jesus speaks volumes to us about the transformational power of Jesus’ worth in a surrendered life. But it must press us to reflect deeply on whether or not our expectation for personal comfort and safety should in any way be connected to our Christian faith and drive us to cast off any temporal insulations we may have built around it.

So how can I join Christ’s sufferings as part of my personal faith along with those who risk personal safety just to know Him?[3] The easy part is to pray for these brothers and sisters. But consider that choosing godly risk can take more forms than just potential personal harm. Could you choose to risk your financial security to give away resources in the advancement of Christ’s kingdom? Could you choose to risk your job to become a clearer personal witness? Could you hear the call of God to take your family and follow Jesus among an unreached people? Could you shed the notion that Christian faith is yours personally to direct and give your obedience fully to the One who died to give that faith to you?[4]

“Come to Me, all who are weary and heavy-laden, and I will give you rest. Take My yoke upon you and learn from Me, for I am gentle and humble in heart, and you will find rest for your souls. For My yoke is easy and My burden is light” (Matthew 11:28-30, NASB).

Gord D. is a longstanding member of our team deploying global workers into sensitive contexts. GP serves as a global worker in an African country.